Over on the Yahoo! fellowship blog, I made two posts, one about Danah Boyd’s articles on privacy and how youths use the internet, and another on a wonderful marketing slideshow I found about the future economy being one of “reputation management”.

There’s two points from Boyd’s Facebook article that I didn’t make on the other blog.

One, I disagree with Boyd’s opinion of News Feed, but wonder how she thinks of it now, a year or two later, when it’s pretty standard practice over at Facebook…

“Facebook says that the News Feed is here to say. This makes me sad. I understand why they want to provide it, i understand what users are tempted by it. But i also think that it is unhealthy, socially disruptive, and far worse for the users than the lurking employers ready to strike down upon thee with great vengeance for the mere presence of a red plastic cup.

“I also think that it will be gamed. Given a new channel for identity performance, people will begin engaging in a new form of impression management. They already write wall posts to be seen – it will be taken to a new level. Their public displays of connection will take on new strength as they seek to make a performance out of the friending act. They will remove friendship statuses in the most dramatic fashion possible, announcing as far as possible about the evilness of the other person. Facebook News Feeds could make LJ drama look like child’s play.”

Certainly impression management is not a bad thing, is it? That’s what we call having a reputation… Look at it this way: what if, if someone drops

Currently we have very crude ways of managing our reputations. It’s so crude in fact that we avoid saying things just so we don’t deliver an ultimate crushing verdict of “I don’t like you” to anyone. Which is something Boyd points out later:

“The term “friend” in the context of social network sites is not the same as in everyday vernacular. And people know this. This is why they used to say fun things like “Well, she’s my Friendster but not my friend.” (The language doesn’t work out so cleanly on Facebook.) The term is terrible but it means something different on these sites; it’s not to anyone’s advantage to assume that the rules of friendship apply to Friendship.”

Right. We need a social networking tool that gives us granularity to capture the essence of all our relationships. Not everyone is a best friend forever; some are enemies. This needs to be reflected in some way in our online social networks.

The Trendbuero slideshow is awesome. It says that the recognition economy of the future will allow us to self-actualize:

“Opportunities for design will continue to increase. Compulsory self-responsibility will force consumers to optimise their own self. This will call for deliberate decisions and new orientation frames. Identity will become a management assignment. Tomorrow’s economy will be shaped by the lack of identity and affiliation. Recognition will become the new key quantity.” 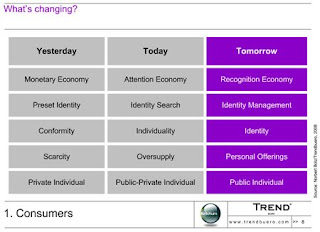 It also tries to employ the word “egonomics”:

Egonomics — an economy geared to the own self.

Man, I think Galapag.us is really on to something!